The Mien Evangelical Church was established in 1979, which was formerly known as Iuh Mien American Baptist Church and Seattle Yiu-Mien Christian Church. The majority of the church members resettled in Washington State from Laos and Thailand as political refugees. We are very grateful and thankful to our Lord and Savior for bringing all of us safely to the United States. In 1979, a small but enthusiastic congregation of three families started worshiping at Northgate Gospel Chapel in North Seattle. Transportation for the Mien families was provided by the mother church to and from the church facility every Sunday. By late1980, the number of families had grown too large to be transported from South Seattle, where most of the families resided, to North Seattle. With the help of Verna Aspray (Feix Orn), a missionary from Canada and Mr. Cal Uomoto, president of World Relief, the congregation was moved to the Japanese Presbyterian Church in Seattle and elected Mr. Chiem Fow Saechao to serve as a volunteer lay Pastor. By 1983 the membership grew to about 50 families.

In late 1984 many families moved to Oregon, California, and other states and the membership declined to just 15 families. During this period the congregation went through a challenging time with a lack of leadership, discipleship, and spiritual growth. In 1986 Mr. Fou Wa Saechao and his family moved to Seattle from Texas and took on the responsibility of a lay Pastor. Together with Chairman Mr. Yoon Nin Saechao, they prayed for vision and revival of the congregation. God blessed the congregation and the membership increased to approximately 350 members by 1995.

With the growth of the church came the need for a full-time pastor. The Lord brought Reverend Prasarn Saelee and his family from Thailand to pastor this church in early 1997. Although the church had been growing in number, it wasn’t until Rev. Saelee came that the church as a whole grew in spiritual maturity and Christlikeness. Under his leadership, the congregation had the vision of having their own building to worship. In July of 1997 a plot of land was purchased in Seattle with the hopes of building the home of the future church. Members immediately began the task of clearing the land without a permit from the county. The congregation was fined and instructed by the county to plant back every tree that was cut down. Furthermore, the county had the plot of land surveyed and concluded that it was a “wet-land.” The county claimed that there wasn’t large enough buffer zone from the “wet-land” area to build a structure. The congregation decided to sell the land at a discounted market value. Praise God! The land was not able to sell even at discounted price. With the leadership of Mr. Youd Sinh Chao and the boards, the plot of land was resurveyed by an independent engineer and declared not a wetland.

In March 1998 the congregation moved to a Lutheran Church in Tukwila as a temporary home. After five years there, the congregation decided to purchase the Lutheran Church when it was up for sale in 2003. At around the same time, the plot of land was reappraised and sold for almost a million dollar a few years later. With proceeds from the sale of the land, the congregation was able to completely paid off all outstanding loans on the church and assisted a fellow sister church in California to purchase their church building. We thank God for all the trials and the triumphs that He had faithfully guided us through. Truly, it was His plan and timing for everything. We believe in the miracles and power of our almighty God! 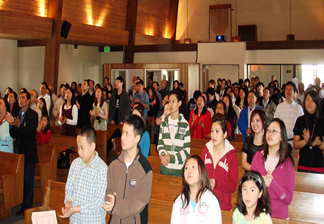